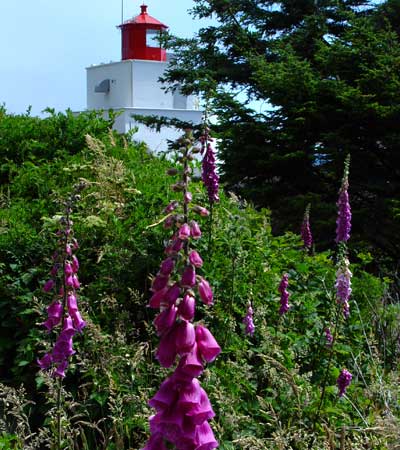 Wolf Walk Tour with Tanya
- A 'Don't Miss!' When You're in Ucluelet (2018)
We'd originally planned to walk the trail on our own but I spied that there were free interpretive tours on the Saturday we were in town - can't pass up a free tour! Now, I always embark on these adventures without any pre-conceived notions of how it will go... because you just never know. Let's just say we were very pleasantly surprised. Tanya, the guide for this particular tour, was extremely knowledgeable about the flora and fauna, and shared tonnes of interesting anecdotes and factoids, but it was her enthusiasm that made the tour so memorable. Super friendly, inclusive of everyone, clearly loves this part of the world... we'll definitely be looking for Tanya's tours when we next visit Ucluelet. Highly recommended if you're wanting to add a bit of depth to your visit.

Often rated as the #1 attraction on Vancouver Island and the #2 best thing to do in British Columbia on Trip Advisor. 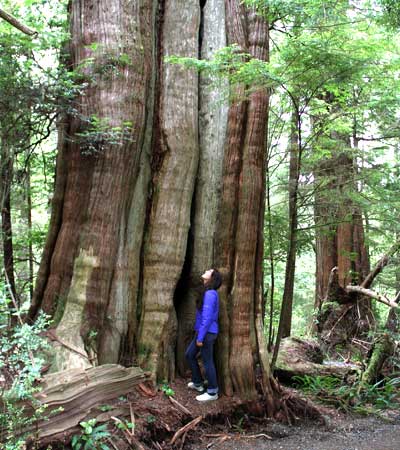 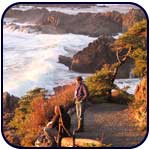 There is something about the edge of the sea.

The unbounded energy of waves crashing on sculpted rocks with its attendant deluge of negative ions, the wind-lashed trees, the profusion of life – aquatic, terrestrial and avian. In the Pacific Northwest everybody loves a walk beside the ocean. Accordingly, there is a plethora of well-known trails along these northern coasts that traverse the spectacular edge of the continent and I consider myself fortunate to have enjoyed most of them.

A new addition, the Wild Pacific Trail near Ucluelet, British Columbia, may be the most beautiful coastal trail of them all. Read full article > 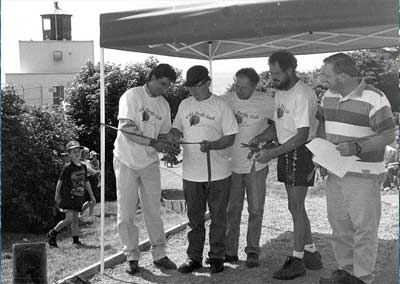 by LAURISSA CEBRYK, Special to the Westerly News, Sept 2019

Twenty years ago, after nearly 16 prior years of dreaming, planning and pitching ideas, the Wild Pacific Trail came to be in the form of the now incredibly popular 2.6 kilometer Amphitrite Lighthouse Loop.

The Lighthouse Loop alone sees over 100 visitors per hour. Adding to the feat is the fact that the entire expanse of the Wild Pacific Trail was built using strict, green trail building practices designed to preserve and protect the areas it meanders through.

Despite the restrictions, or perhaps because of them, the trail manages to be undeniably breathtaking, showcasing the wild and rugged beauty of the untamed elements of the West Coast. While locals already knew Ucluelet for the hidden, coastal gem it was, the trail finally put Ucluelet on the map as a destination.

“The district and community took a leap of faith, trusting in Oyster Jim’s vision for a world class experience,” remembers Wild Pacific Trail Society President Barbara Schramm. “Few believed a trail could be an economic generator but, now, even big city developers are converts to the concept of protecting our pristine coastline with a trail corridor.”

The proof of this lies in the stats. Since its creation, TripAdvisor has ranked the Wild Pacific Trail as the top thing to do in Ucluelet, as well as the second best destination for natural features and parks on Vancouver Island...”

In fact, the Wild Pacific Trail has grown into a priceless piece of life in Ucluelet. Locals can be found out for a run, a dog walk, or just taking in the beauty of their own home at any one of the numerous, scenic lookouts along the way. With more traffic and community engagement, invaluable resources have made their way to the Wild Pacific Trail, including fantastic interpretive walks that aim to educate and entertain, as well as even more sustainable trail additions, interpretive signage and the indispensable resources for trail upkeep. Looking forward, the Wild Pacific Trail Society plans to focus on stewardship and environmental education, staying true to their motto, “Inspiration through Nature.”

To learn more about the history of this trail watch this 15 minute video:

UCLUELET — One of B.C.’s best-know oceanfront trails opened a new spur Saturday.
The spur, which cost $40,000, winds through the old-growth forests of the municipality’s He-Tin-Kis Park down to Terrace Beach. It includes a 100-square-metre observation pad, and highlights thousands of years of First Nation’s history through three signs.

“The focus of doing this trail was to recognize the First Nation’s history right under our feet,” said Barb Schramm, trail society president.

Schramm said the society wants people to know they’re standing on 4,000 to 5,000 years of First Nations history, and a midden exists at the end of the spur. She said three new signs will be found along the spur and will discuss that history.

Mayor Eric Russcher called those who turned out Saturday morning a “great gathering,” and he lauded “Oyster Jim” Martin, the trail’s founder, for his vision.

“It just adds one more thing to our community,” said Russcher. “The vision continues.”

Vi Mundy, chief councillor of the Ucluelet (Yu?lu?il?ath) First Nation, a signatory of the Maa-nulth First Nations Treaty, said the spur and its recognition of native history cements the band’s relationship with the municipality.

“Our council has been really involved with the village council,” she added.
Mundy said every area on the municipality’s side of Ucluelet Harbour has a First Nation’s name with special meaning.

Band members, fluent in Nuu-chah-nulth, helped the society with the signs, she added. “We provided the history. We also provided the correct spelling of the names of the area.

“We hope to see more of this.”

Vancouver Island... the most rewarding outdoor exploration is found outside the city, away from the crowds and off the beaten path. Hop the BC Ferry from Vancouver to Nanaimo, on Vancouver Island’s east coast, and drive three hours through mountain passes to the wild, dramatic west coast. The new Wild Pacific Trail skirts the rocky, rugged shoreline, overlooking sandy coves lined with driftwood and tidepools and the Pacific beyond them.

The hiking trail is being built in sections (there are three of seven set up so far), hand-cut through dense old-growth forests of cedar and spruce, with viewing platforms that let hikers see turn-of-the-20th-century lighthouses, kayakers heading to nearby islands, and the annual gray whale migration (about 20,000 pass by the island from February to late May). The base for the Wild Pacific Trail is a folksy fishing village called Ucluelet, a former First Nations settlement dotted with seaside inns, bed-and-breakfasts and beach cabins... which has direct access to the trail. BONNIE TSUI